A Murder of Crows2 min read

This more poetic term for a flock of crows can be traced back at least to the 15th century, when it was recorded as a “murther of crowes”. Murther is a variant of Middle English murthre ‘murder,’ though the th sound had begun to be replaced with a d around 1300 C.E. There are several theories as to how this particular term came about, but all of them have to do with the supposed behavior of crows.

For instance, crows are scavengers and therefore often seen feeding on rotting bodies of various sorts. Survivors of wars have described how the battlefields were covered in black as crows (and ravens) came down to eat the dead. Another theory hearkens back to old folklore which told of groups of crows essentially holding court over members of their flock that had committed offenses. If they decide against the “defendant” crow, then the rest of the flock swoops down on it and kills it.

The basis in fact is probably that occasionally crows will kill a dying crow who doesn't belong in their territory or much more commonly feed on carcasses of dead crows. Also, both crows and ravens are associated with battlefields, medieval hospitals, execution sites and cemeteries (because they scavenged on human remains). In England, a tombstone is sometimes called a ravenstone, all derived from this folk tale of the Murder of Crows. 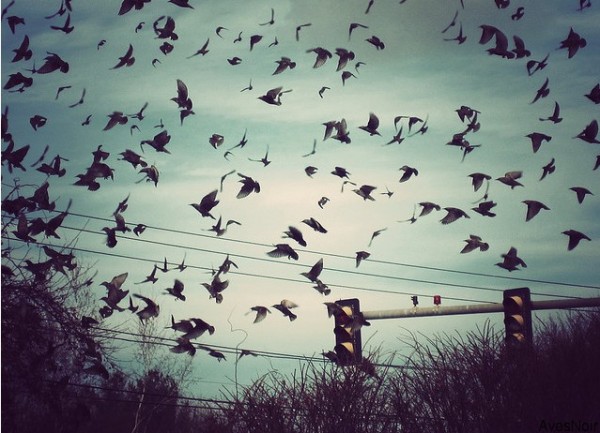 Special for our Canadian Readers:

A Murder of Crows is a visually stunning one-hour documentary that recently had a one-year anniversary re-run on CBC (Canada) and will appear again later this month. It is a film that explores a unique pairing of science and cinema as world-renowned scientists, including crow expert Professor John Marzluff, joins forces with an award-winning camera team to explore the secret world of crows. A scientific exploration with a compelling twist, the film is a visually stunning HD documentary that reveals new insights and understanding into this haunting and elusive species.

The average crow knows a tremendous amount about us, from our eating habits to our traffic patterns, but the average human knows relatively little about the intimate life of crows. And there is so much worth knowing. Crows are one of the most common birds on the planet. They have more brain mass per unit than any other bird group except the macaw and as result they often behave more like primates or even humans than they do birds. Crows have a proven ability to reason and problem-solve and have long and dependable memories. They engage in complex social interactions that range from group play and hunting to gang-style killings and funerals.

If you are in Canada, you can watch the entire documentary here. If we find any other resources for those of you outside Canada, we will be sure to send out a Twitter or Facebook update!