The sagas of Westeros, known as A Song of Ice and Fire and adapted into the wildly reknowned Game of Thrones TV series, makes frequent use of Crows and Ravens as omens, messengers and atmosphere. The foundation of the stories, plots and characters also draw heavily from real-world mythologies.  How much of this is fantasy and how much is rooted in truth? Here we examine the many facets of the Westerosi corvid and how it relates to the real-world counterpart – or doesn’t.

Warning: this post contains mild spoilers if you have not read the books!

The stories refer to Ravens mainly in the context of messengers, however later on they appear to Sam and Gilly beyond the wall in a massive flock perched in a weirwood tree.  The show also used “Ravens” in their promotional teasers, however the show often interchanges crows for ravens. So how can you tell the difference? Ravens are the largest corvids, and also the largest “songbirds.”  Twice the weight of a common crow at about 3 pounds (1.5kg), they grow to be an average of two feet (60cm) tall and have a wing-span of nearly 3-3.5 feet (1m) . They also have a diamond shape tail rather than the rounded square tail shape of the crow, and shaggy “beard” of feathers just below their heavier, hookier bill. 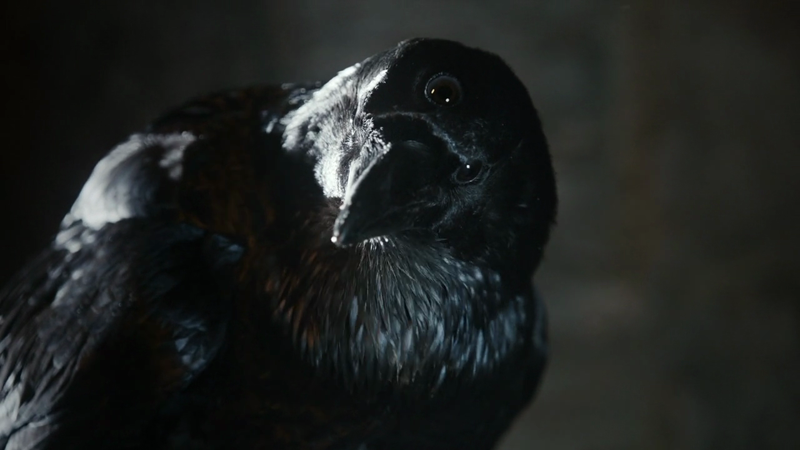 Ravens factor into almost every known ancient mythos. The Chinese, Egyptian, Greek, Semitic and Siberian legends depict the raven as a messenger of storms or bad weather. In African, Asian and European legends, the raven is an omen of death. In middle-European lore, ravens were often used as exponents of evil (for example in Shakespeare’s Julius Caesar, Macbeth and Othello). In contrast, Norse mythology puts ravens in a place of power and worship, often associated with the god Odin.

Speaking of Odin, many theories and parallels have been drawn between Norse Mythology and the characters, plots and legends in A Song of Ice and Fire.  One such theory compares the Three Eyed Crow, which Bran seeks throughout his story, and Loki, the Norse god.  From what we know of the Three Eyed Crow thus far in the book series, we can assume Brynden Rivers , also known as “Bloodraven” or the” Night’s King”, is the Three Eyed Crow.

So how does he compare to Loki? Dorian the Historian explains on his blog that:

He is an extremely old Targaryen bastard living under the roots of a weirwood tree far beyond the Wall. (Loki lives amongst the trees)

He had been banished and condemned to the Night’s Watch for what was probably the death of Aerion Targaryen. (Loki was blamed for the death of Baldr, a great Viking leader)

Baldr’s death(In the book represented by Aerion Targaryen in the World’s history, then repeated again as Joffrey’s death) is seen as the first in the chain of events which will ultimately lead to the destruction of the gods at Ragnar. Baldr will be reborn in the new world, according to VÃ¶luspÃ¡. Sound familiar? This is very similar to the prophecy of Azor Azhai, who show watchers think is Stannis Baratheon. So as you can see, the Three Eyed Crow is quite an important symbol and character in both the book and adaptation.

But let’s move on to the warging bit… 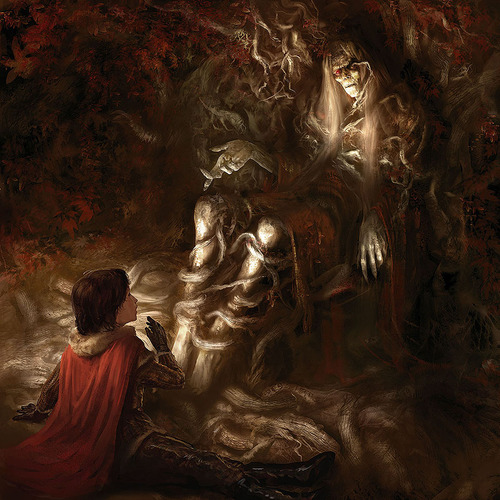 Warging, by definition, is mind control or mind-melding another living thing. Most mythologies involving Ravens also involve shapeshifting, which is conceptually similar. Native American legend tells of Raven shapeshifting into a man, a pine needle and even a wolf.  Japanese mythology has spirits taking Raven form, or women shapeshifting into Ravens. Norse mythology is rife with shapeshifting lore, including Loki as previously mentioned.  While this is a talent hard possessed by real-world human beings, who is to say it isn’t actually possible?

Both Bran and Jon Snow are connected with crows and ravens using their warging ability. We can also assume that Bloodraven makes frequent use of Ravens as his eyes, both in the scene with Sam and Gilly, and as Mormont’s Raven. 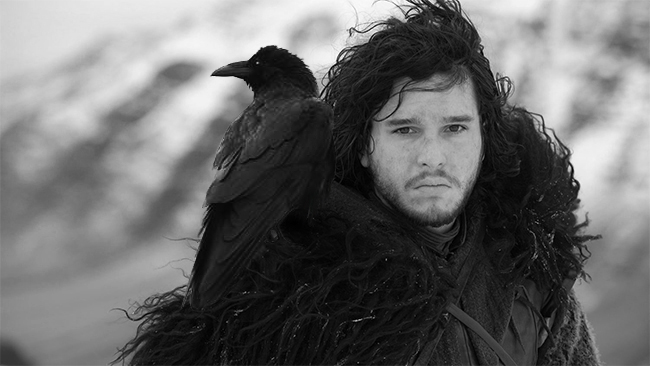 Lord Commander Mormont’s Raven(later becoming Jon’s Raven) stars opposite the Three Eyed Crow as the only other prominent corvid-character in the series. He is abnormally large, extremely old and commands a varied vocabulary.

Ravens live a very long time – from 40 to 80 years, so it is not unusual for Mormont’s raven to have been around as long as Maester Aemon.

Ravens are capable of the most complex vocalizations in the bird kingdom. They make many different kinds of calls varying from a low, gurgling croak to harsh grating sounds and shrill alarm calls. As the show plainly demonstrates, Ravens can be taught a variety of words and phrases, and have even been taught complex forms of communication through reward systems training similar to the methods made famous by Einstein the Parrot. Scientists have placed their vocalizations into as many as 33 different categories based on sound and context! 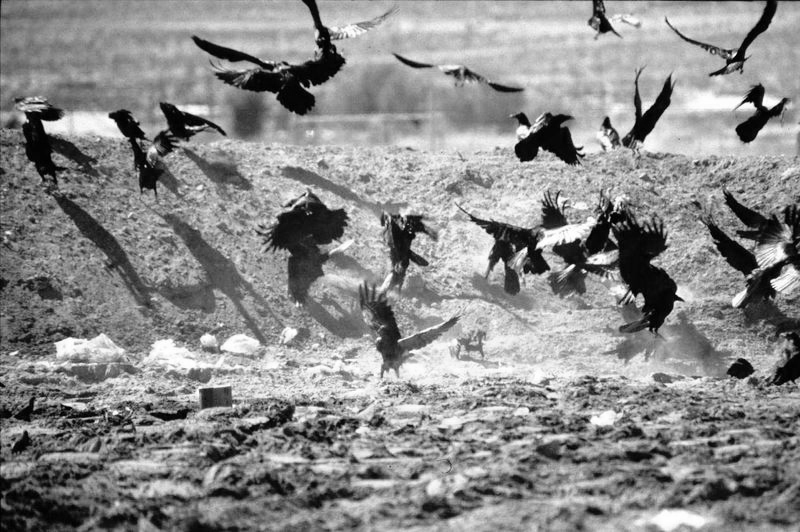 Crows and Ravens do love corn, so this is an apt request from the Ravens of this story. The Raven diet is quite variable though, including fruit, nuts, seeds, fish, carrion, trash and an occasional french fry. Ravens are not birds of prey – you don’t need to worry about your dogs or cats roaming the yard unattended, just their food bowls, as Ravens are adept thieves.  Ravens will dig through snow, plastic bags, bins or compost to find their dinner, and may also follow wolf packs,  hunters or fishermen for a meal. Ravens are known to steal the food of many birds and mammals, even from dogs.

As the Game of Thrones is played out, the world is rife with war, plague and death, and thus crows are seen everywhere preying on the spoils. They are seen eating flesh, pecking out eyes and numerous other deeds usually reserved for vultures. This is not far from realistic – although only some kinds of Crow and Raven are known to eat carrion as a matter of course, mainly depending on their environment and options.

In this day and age, we know that crows and ravens often use their amazingly high IQ to manipulate other species where meals are concerned.  They have been observed calling to dogs, wolves or other predators to attract them to a corpse the Raven cannot scavenge or open on their own. This advanced intelligence also allows them to share social and territorial spaces with these kinds of predators without becoming prey themselves.  Ravens and crows have been observed working together to distract a person or animal away from a potential meal so the other can snatch it away.

Historically, crows have been depicted scavenging or circling the dead through many artforms, and have been used in Norse and Tibetan ritual to consume corpses in honor of the dead as vessels for rebirth.

This common idiom in our story refers to Ravens as omens of something bad.  This comparison is used throughout history and mythology as well. Ravens and Crows are famous symbols for death, tragedy and misfortune, which is likely the driving force behind author George R.R Martin’s use of them in the books to foreshadow and set the scene.

The most prominent role Ravens play in the series is as messengers of their sage-type masters, the Maesters of each keep or castle, and by Sam and Master Aemon on the Wall. This serves both functionally, to get information from one location to another, and figuratively as omens or bearers of often bad news.

While Ravens are super-intelligent, they were likely not used as messengers at any point in history, contrary to the romantic notion put forth in the series. Instead, carrier pigeons were used for their unique navigation and magnetic sensitivity. As ravens are not migratory, they would not make the best homers, although they range for very long distances.

However, Ravens have been noted as useful spy tools, purported as trained eavesdroppers capable of repeating back snippets of conversation overheard by the enemy, or retreiving items. 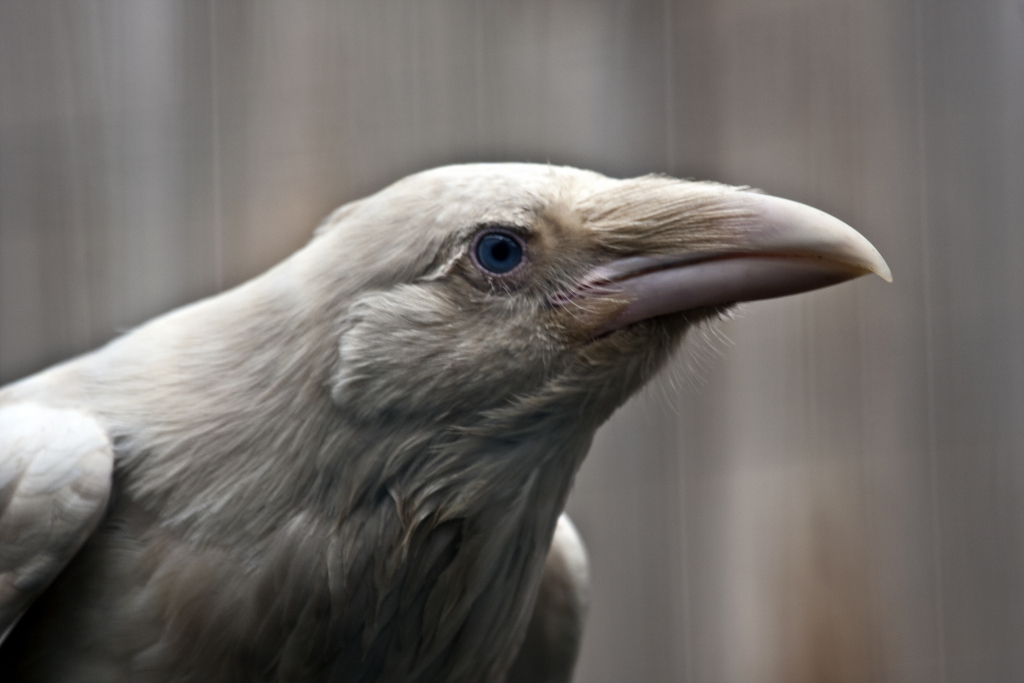 Among the vast arsenal of messnger Ravens employed throughout Westeros, the Maesters of the Citadel use a special white raven to distinguish messages coming from the Citadel from other messages.  Not to be mistaken for an albino bird, white ravens are quite real, and are the result of Leucism, a genetic disorder whereby the pigmentation cells are unevenly distributed, hence resulting in patches of feathers looking paler, bleached looking or show white. White ravens are the result of the mating of two common ravens with the same genetic defect. The same pair could produce many generations of white ravens, since common black ravens are monogamous and long-lived.

White Ravens have also been revered in mythology, including the story of Noah’s Ark (later translated into a Dove, which was more of a romanized romantic symbol). The significance of white ravens being used by Maesters of the Citadel could be to symbolically differentiate the messages they carry as being peacful or good, or it could simply be a means for noting importance.

Dire wolves and common wolves are almost as common as Ravens in A Song of Ice and Fire, with both Nymeria and Ghost in close companion ship with Crows and Ravens throughout their wanderings.

This partnership is common in the real world, too, as both Ravens and Wolves share common habitats. Aside from ravens enterprising on wolves as competent providers of food, Ravens are also extremely playful, earning them the legendary nickname of “trickster.” One of their favorite games is tail-pulling, which has been observed as perpetrated on larger birds of prey, wolves, big cats and even people. In one account, ravens were seen perching on the roof of a local supermarket, waiting for unsuspecting humans to walk by before pushing a clump of snow over the edge to fall on their heads.

North of the Wall, it is easy to imagine Raven playing with Ghost in much the same way.

In what other ways do you notice crows and ravens used in A Song of Ice and Fire, and what significance, if any, do you think they portray?