Meri C Fox-Szauter has been observing one flock of crows for almost a decade, working from her car studio every day at Acadia National Park, Maine in the North-East USA. Her break through work in drawing crows came a few winters ago when they would land on the asphalt, “…they would fluff out their skirts and become crowbergs. That inspired my series Floating on the Asphalt Sea, which morphed into Winter Crows.”

On the flock, Meri comments,”One of my crows, whom I call Solo boo, stands out in particular and always seems to be separate from the rest of the flock.   He will be the first bird to arrive once I get to my spot each day and will be the one just hanging around while I’m there.   The others in the flock tolerate him, true, but he’s always seemed a bit apart from them all. I’m most pleased to note that in the past two springs, Solo seems to have found a mate.  Now the two of them are the ones I see the most.”

“As I’m sure you know, crows get tucked up under canopy and make this soft oooooh-oooooh sound.  I started responding to that a few years ago, saying boooooo-boooooo, and now the oldest ones greet me (in winter and early spring) with their own variations of the boo-boo sound I make.   Solo boo, is I think the best at it; his booo-boos is the most articulated.   One of the birds just makes the head bob and clicks his beak, but that’s how I know who it is I’m speaking to.” 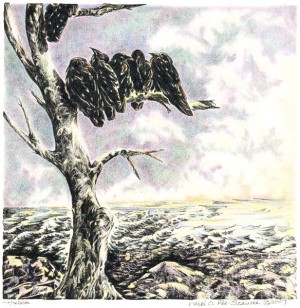 “The most inspiring thing about this flock (and I’d guess all of them) is how they work together.   There’s always one bird on guard; they have a strategy whenever the resident merlin goes after them, in that one of the crows leads the merlin on a chase with the rest dive bombing the predator.  The only season of the year where they won’t sit around me and preen or allow me to watch is, of course, when the young are out and about (this years batch just screams and hollers when they see me!). This particular flock is comfortable around me enough that in the winter they will sit in the sun around my car while I sit inside it and draw. ”

To keep up with Meri and her work, visit her website at www.wallofthorns.com